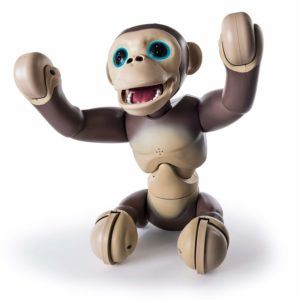 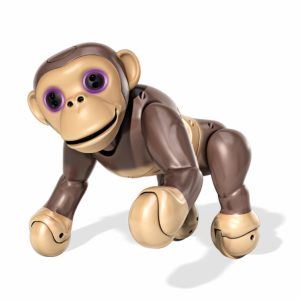 What’s In The Box/Battery Requirements

Go bananas over your very own interactive Chimp — Zoomer Chimp! This unpredictable Chimp has a life of his own. Using True Balance Technology Zoomer Chimp moves just like a real Chimp: on all fours, flipping, standing, and rolling all on his own! Through his moving face, light up eyes and awesome Chimp sounds, he lets you know exactly how he’s feeling. He senses his surroundings and even follows your movements! Train him with one of his 10 easy-to-remember voice commands; tell him to “flip”, “Go Bananas!”, and more. Try “Chimp Talk”, he’ll repeat what you say in his own Chimpy way! Through Progressive Play, the more you train him, the more responses you’ll unlock! Zoomer Chimp is your PRIME-mate!
SaveSavedRemoved 0